The screen will go here

When you watch an ATVer's picture, you would like to tell the sender conveniently how well it is being received. You could say, "Your picture is 20% snow", etc. But that terminology is very vague and wordy. The only exceptions are "I can't see it at all" or "You're perfectly snow free" which, we all understand very well. It's analogous to the digital 1's or 0's indicating "On" or "Off" but it's the "shades of gray" that become a bit more arbitrary.

To solve this the "P" system was developed for AM signal reception. It goes like this. "P" stands for picture level and is broken into six levels from P0 to P5. A signal received as P0 is recognizable to its existence only. No detail is discernable and usually only sync bars can be seen in the snow. Experience has demonstrated that the minimum recognizable signal change is about 3db (2:1 power change) so 6 dB/step is easily recognized and represents sufficient precision. The numbers continue in 6 dB steps to P5, which is a snow free signal and 30 dB greater than P0. Beyond that, we tend to be complementary to the sender, such as, "P5 plus", "broadcast quality", etc.

Everyone likes complements and ATVers are no exception so if you like what you see, tell the sender about it. However, try not overdoing it. P-unit reporting is universal across the USA and in other countries as well. (Remember the P-unit reporting system is accurate only for AM modulation because of the near linear levels. P-unit reporting of FM signals can be used as long as it's understood that it will not be 6 dB/P unit because of the non-linear nature of the receiver detection system). For a visual representation of what the AM signal for each P-unit level looks like, see figures below . The patterns are sized for best viewing at 640 x 480 but can be viewed at resolutions up to 1024 x 768. 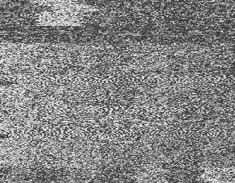 P0 - This picture is barely recognizable. Only Sync bars can be seen. Call letters are not visible. 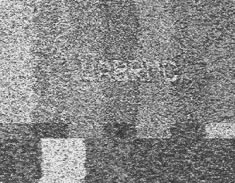 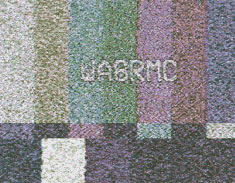 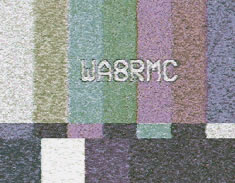 P3 - Signal 18 dB stronger than P0. Picture detail is much better but snow is still visible.